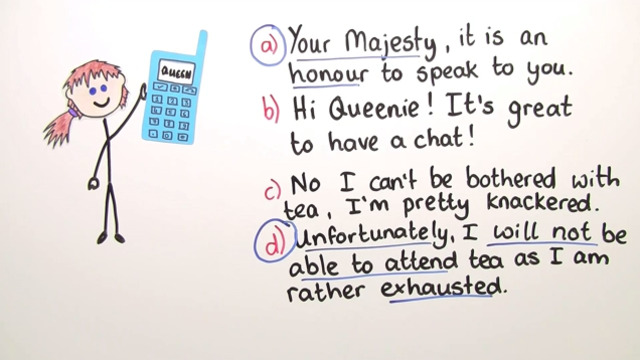 Good day, it is a pleasure to meet you. My name is Camilla.

Hey, how is it going? I am Camilla.

Hello, my name is Camilla and I come from England. Welcome to this video about word choice in the English language.

Before we start it is probably a good idea to have a dictionary handy, because this video is only going to be in English. So, why is it important that we look at the word choice? Well, in English there are lots of different ways of expressing yourself. As in German you can express yourself formally, or with neutral or standard English, or informally with slang. When you work with the English language and you read texts and maybe you analyse newspapers or songs, it is important to be able to recognise the style and the register. So, to know whether the author is meaning to appeal to the reader in a formal way or maybe is trying to write informally to a certain purpose. Once you are able to recognise these styles and the registers it will help you to understand the language on a deeper level. You will understand the connotations indicated by the language and the underlying meanings - oder Nebenbedeutung. So let's get started.

Our fist example ist the word "Geld" in German. There are several ways of expressing this in English. If you were to speak formally, you would probably refer to "Geld" as "wealth" or "currency", which is really the tecnical term. In standard English you would say "money". Informally you could probably say "cash", but if you wanted to be very informal and use slang English, you could say "dosh" or "dough". This is Billy. He wants to ask his friend for some money: "Do you have any currency I could borrow?"

Ups! Something is not right...! ...exactly! "Currency" is far too formal if you are speaking to a friend. So you should probably say " Do you have any cash I could borrow?" Let's look at the word "sterben".

So, formally you could say "to pass away". In standard English it would be "to die", but informally in slang English you would say "to kick the bucket". Look at this newspaper article: "At 3 a.m., after a long battle, the prime minister kicked the bucket." Something is not right. Exactly, "kicked the bucket" is far  too informal for a newspaper. It is also a little bit disrespectful in this case. It would be much better to say "At 3 a.m., after a long battle, the prime minister passed away." You should probably note, that English newspapers are usually wirtten in standard English and not really in formal English, although sometimes these boundaries are blurred. And what's about "schwanger sein"?

In formal English it would be "to be with child".  This is almost an old-fashioned expression. In standard English you would say "to be pregnant" and in informal English you could say "she has a bun in the oven". As you may have noticed, the slang English is often quite funny.

In formal or standard English you could say "calm down". This would be appropriate in both situations. In a more informal situation you could say "chill out!" and in slang English, so very informal, you could say "keep your hair on!" or "keep your wig on!". "Wig" means "Perrücke". Here is a radio debate with a president at the United States: "Please, Mr. President! Keep your wig on! Let's move onto the subject of climate change." As you probably noticed, "Keep your wig on!" is far too informal for a radio debate. It is much more likely that you hear something like "Please, Mr. President! Calm down. Let's move onto the subject of climate change."

Great, so now you have a vague idea of which words you can use in which situations. And now I am going to read you two statements about Robert, who unfortunately died. Can you identify which registers they are and which styles they are written in? "Robert passed away suddenly, leaving a pregnant wife behind. He had had a tremendous life, earning lots of money." "Robert kicked the bucket all of a sudden, leaving his wife with a bun in the oven. He'd had a wicked life, making loads of dough." Exactly, the first one is formal or maybe even standard English and you can tell this by the words "passed away", "pregnant", "tremendous" and "money". The second one is more informal or slang English, which of sure you recognised because of the phrases "kicked the bucket", "bun in the oven", "wicked" and "dough". Your final test is a conversation with the Queen.

I'll give you two options of what you could say and you have to decide which one is more appropriate. The Queen phones you up and this is how you respond:

a) "Your Majesty, it is an honour to speak to you."

How would you answer - a) or b)? Exactly, you will answer with a). You would call "Your Majesty", because it is respectful and to say "it is an honour" is a formal way of expressing your gratitude.

c) "I can't be bothered with tea, I'm pretty knackered"

d) " Unfortuntely, I will not be able to attend tea as I am rather exhausted."

Of course, you will answer with d) - with "unfortunately" and "I will not be able to attend" is rather a formal way of expressing yourself and "exhausted" is a way of saying "tired", is also formal.

And now your conversation has come to an end. How would you say "Good bye" - e) or f)?

Of course, you would never say e) - you could of course say "Good bye", because it is standard English, and saying "Your Majesty" once again shows respect. Well done! You made it to the end of the video. Thanks very much for your listening and I hope you enjoyed it. Fare well. See you later. Take care. Good bye.