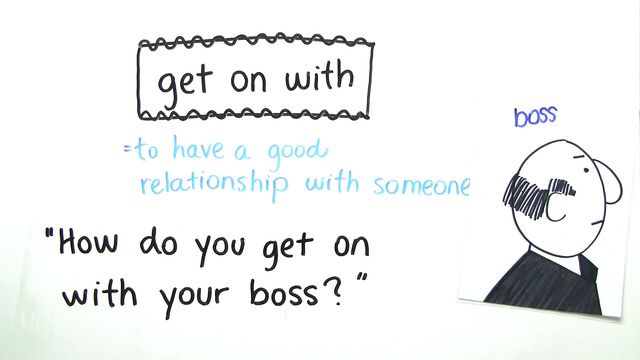 Hello and let me welcome you to this clip. If you want to improve your knowledge about phrasal verbs and prepositional phrases in English, then you have chosen the right video. I am only going to use English today. So you may want to have a dictionary in English near you in case you need to look up some words. I'll give you a tip: if you don't understand something I am saying, simply click on the pause-button and look the word up before you continue watching. Let me begin by telling you something about the English language and style. Look at these two terms: Standard English, Colloquial English. Do you know what they mean? Look at this sentence: There was an automobile accident at the corner of the Fort Street and Douglas Avenue. This is an example of Standard English. It is a correct, formal version of English. Usually you find this version in the newspapers and magazines. Now, I'll show you an example of Colloquial English. When he told me the story, I almost died laughing. "To die laughing" means "to laugh really hard". This kind of language is used when for example two friends are talking to each other. It is also often called "Informal English". Another example of Standard English is the expression "to pass away", which means "to die". However, you could say the same thing in a more colloquial way: "to kick the bucket". Again, it is just one meaning said in different ways for different situations. When you read about someone who died, in let's say a newspaper article, the author would say "he died" or "he passed away". But the author would never say "he kicked the bucket". That would be totally inappropriate. So it is always good to be aware of these different styles in English, to adapt the language you are using to different situations. And remember that the difference between Standard and Colloquial English is NOT the same as the difference between British and Amercian English, because for example American English can be Standard, but it can also be Colloquial. I told you this because it links up to our topic today: phrasal verbs and prepositional phrases. Let's start with phrasal verbs. My French isn't very good, but it's enough to get by. "Get by" is a phrasal verb and it means "to manage". A phrasal verb is a combination of a verb + a preposition or a verb + an adverb. get by --> a verb + a preposition pass away --> a verb + an adverb Sometimes there is not just one preposition but two. We have already learned what the term Colloquial English means: the informal version of the English language. And phrasal verbs are typical in Colloquial English, and they are used in spoken language very often. It is very important how you say them. You put emphasis on the preposition or on the adverb: get BY, pass AWAY, and not: GET by or PASS away. So remember: get BY, pass AWAY. Sometimes, phrasal verbs are easy to understand, like for example the phrasal verbs that I am sure you have known for a long time already: wake up, get up, give back, come back or throw away. But unfortunately, in most cases it is difficult to say what a phrasal verb means because you can't just get the meaning by translating the individual words. Like here: "I need to cut down on coffee". "Cut" is easy. You can cut wood or cut your finger. "Down" is the opposite of "up". And "on" is a basic preposition. But if you put all of these meanings together, it doesn't make any sense, because "cut down on" means "to do less off something". "I need to cut down on coffee" means that I need to drink fewer cups a day. So, the only way to really understand and use phrasal verbs correctly is to learn and memorize them. But don't worry! It is not impossible. Let me show you a few common phrasal verbs. look after: It means to take care of someone, for example a child or an animal. "Can you look after my cat while I'm on holiday?" put across: This means to communicate something to someone. "I find it difficult to put across my ideas to my colleagues." get on with: This means to have a good relationship with someone. "How do you get on with your boss?" put out: means to extinguish, for example a fire or a cigarette. "Please put out your cigarette." And three more: run out of: means to not have something any more, like sugar or milk. "We've run out of milk. Could you go to the shop and get some?" find out: to get information. "Please find out when her train will arrive." And break up: This means to end a relationship. "Susan broke up with her boyfriend." Good. There is something more I want to tell you about phrasal verbs: You can often use them in two ways. Look at this example. "Don't wake up the baby." "Don't wake the baby up:" Both versions are correct. But you can only say: "Don't wake her up." and not "Don't wake up her." Alright, so that was Colloquial English. But let us now talk about Standard -formal- English. In Standard English, it is typical to use the so called prepositional phrases. As the name suggests, these are phrases that contain a preposition, but there is no verb in them. For example:

in my opinion: You use this to say what you think. "In my opinion, cats are friendly animals." on the one hand ... on the other hand: This phrase shows a contrast. "I don't know if I like living in a big city. On the one hand, there's everything you need, on the other hand, it's so dirty and crowdy." in writing: This means written on paper. "I don't want to work for this company anymore. You must give it to me in writing." on purpose: This means that you do something intentionally. You know exactly why you are doing it. "You're really annoying me. You're doing it on purpose, aren't you?" in common: This means to have some shared interests. "The two men had nothing in common." And one mor phrase for you. at last, which means: after long delay. "You've come back to me at last!" Perfect! That is all I wanted to teach you today. Let me now just sum up the facts. You learned that there is Standard English, which you will mostly find in newspapers or magazines and that it is also called Formal English. In this type of English you can often find prepositional phrases, like: in common, on purpose, on the one hand, on the other hand. And we also talked about colloquial language. This is how you speak to your friends. It is also called informal English. For this type of English it is very common to use phrasal verbs, like: look after, put out, get on with or break up.  That's all for today. I hope you enjoyed my video. Have a nice day.