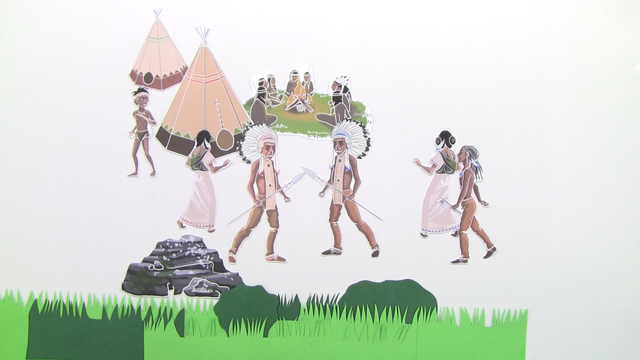 We are Native Americans. We are the first inhabitants of the United States.

I am going to tell you the story of a brave young woman from my tribe a long, long time ago in the Wild West. European settlers are taking more and more of our Native American land. Before these settlers arrived the whole land belonged to Native American tribes, now the settlers want to take the best land and build their farms on it. They employ cowboys to work on the farms and make lots of money. Of course we try to fight them and protect our territory, but many of us have been killed and much of our land has been taken away from us. In 1840 the settlers built the first railroad to transport people and goods across the country. More land is taken away from the Native Americans. Let’s go forward to the year 1842...

Our tribe is having a pow-wow with another tribe. They are talking about the situation. They have heard that the settlers want to continue building the railroad and take away their land.

We are losing our home, our beautiful land and nature. We have to fight! They call us ‘Indians’ and have no respect for our culture! Brother, we cannot fight any more. The settlers will kill us all. We have to leave our home before the Iron Horse destroys us all… The Iron Horse was our Native American name for the train travelling along the new railroad. Because it was made out of iron and looked very frightening to them, they called it the Iron Horse. The settlers say that there is treasure, gold at the end of the railroad. They want to travel with the Iron Horse to find the gold and become rich from our land. They are bad people! What are we going to do? Look! Here is a young woman. Her name is Wauna which means strong. Wauna heard the men talking and was very angry. How could these settlers take her tribe’s land and kill her people? She must save the tribe!

The settlers really want to have gold and become rich. Perhaps if she can get some of this gold and give it to them, make them rich, they will leave her family alone. Wauna knows where to find the Iron Horse. She has seen it in the distance. She runs to the railroad. Wauna hides in the grass and waits. Suddenly, she hears a great noise and sees the enormous moving Iron Horse. She is afraid. But she must be brave. She must ride on this Iron Horse. She must find gold and save her tribe. So she climbs onto the roof of the train. The Iron Horse arrives in the town.

Wauna walks down the street. She sees saloons, stores, banks, with people everywhere. Everyone has come to this town to find gold and become rich. She sees cowboys from the farms going into the saloons to drink. She walks into a saloon: “Get out of here you stupid Indian!” shouts the man at the bar. Outside she sees some men are drunk and fighting, pointing their pistols at each other. This is a crazy place, she thinks! This gold makes people bad. Then she sees some men running down the street on horses with their pistols in the air. Outlaws. Wauna has heard about them. They are bad men who rob trains and banks. The men stop their horses and run into the bank with their pistols. “Give us gold or we will kill you!” they shout. The man in the bank is very scared. I don’t like these European setters, but these outlaws are worse, she thinks. She starts shouting and screaming for help. “Outlaws! In the bank! Stop them!” Men from the town run into the bank and stop the outlaws. The sheriff comes in on his horse and takes the outlaws to prison.

The man in the bank says to Wauna, “Thank you, lady. You are an Indian girl, and you saved my life. Here, take this gold as a reward.” Wauna is very happy. Now she has a lot of gold. Perhaps she can save her tribe now. Wauna takes the railroad back home. When she arrives, she sees some settlers shouting and telling people to leave. They are holding a piece of paper. On the paper it says “ building permission: farm”

She runs up to the men. “Gentlemen,” she says, “I can make you very rich. But only if you promise to let us stay in our home. Destroy that piece of paper and go home. Say that you will build your settlement somewhere else. I promise you will be rich. I have been to the gold town.” The men look at each other. They don’t like Indians and they wanted to build a farm on the land but quick and easy money is more important. “Show us the gold.” they say. Wauna takes the gold bar and holds it out in front of her. “Wow! That’s a big bar of gold! That will make us very rich!” “Destroy that paper and it will be yours!” says Wauna. The men tear up the piece of paper. Wauna gives them the bar of gold. “OK. Your land is safe.” they say. The men laugh. “That stupid Indian girl has just given us so much gold! We will never have to work again! Ha ha!”

But Wauna doesn’t care. She and her tribe are happy. They are rich too. Rich without money. They can keep their land.

Thank you for watching. I hope you liked our story. Bye.

Presidents of the United States of America (1)

Presidents of the United States of America (2)