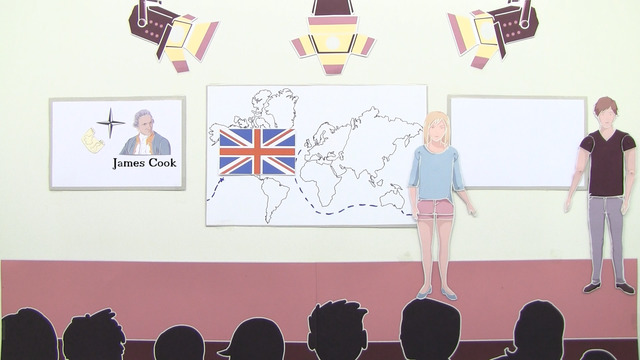 English around the globe – Weltsprache Englisch

Hello and welcome to English today! I’m Isabel, your host. Today we are going to talk about English around the globe. Turn on the radio… songs in English … turn on the TV … American and British TV series, Hollywood films, turn on the computer and you’re online, surfing the web… English is everywhere. And like teenagers all over the world, I learn English at school. It’s the language of computers, the internet, of travel… Did you know that all pilots on international flights must use English to communicate? This is because it’s the most international language in the world. And today we’ve got a native speaker on the show. Welcome Pete! How do you do Isabel? Hi Pete. So you are a native English speaker. Do you speak British or American English? I’m from the US. I speak American English. By the way- In America we often say How do you do? for hello. I see. How do you do Pete? Actually, there are lots of other kinds of English: Canadian, New Zealand, South African, Australian, Indian… and many more. Really? English is the most widely spoken and written language in the whole world. There are around 340 million native English speakers. OK, that’s a lot of native speakers. But what about other languages? Chinese? Spanish? Lots of people speak those languages, too. That’s true. In fact, both Chinese and Spanish both have more native speakers than English. Chinese has around 1,210 million native speakers and Spanish around 358 million. As you can see English only has about 340 million. But many more people speak English as a second or third language: around 700 million people speak English as a foreign language. And English is an official language in countries all around the globe, not just in a few regions. Let me show you on the map. These red areas are where English is spoken as an official language.

So of course in Europe we have the UK and Ireland – and Malta, here on the American continent: the United States and Canada and several Caribbean countries like Jamaica and Barbados. Then we have Australia, New Zealand and islands like Fiji or Tonga. In Asia there are also some English-speaking countries, for example India, Pakistan, Singapore. And in Africa there’s South Africa, Kenya, Uganda, Nigeria…

Wow. That’s a lot of countries. But the UK is quite a small country. How did English travel all the way around the world? To answer that question we need to go back in time... Well, firstly there were the great British explorers like James Cook. Cook was a sailor in the British navy, an explorer and a cartographer- someone who creates maps. He was the first European to sail to Australia, New Zealand and Hawaii. Once places had been discovered, Britian took control of those countries. Settlers from Britain went to live there.

Then there were people who escaped poverty in the UK and wanted to start a better life in the USA, for example. Then there were trading companies like the East India company which ruled India so that it could make money trading goods from India to the UK and around the world. Oh and of course Australia was a prison colony. Prison colony? Yes, hundreds of prisoners – male and female were sent to live in Australia as a punishment for their crimes. Hmm… Australia is very sunny. I would also like someone to send me to Australia…

But not in 1787! The prisoners, their partners and children sailed on the First Fleet: group of eleven ships. The journey took over 250 days. In Australia they had to work. Then they were free to stay in Australia or return to England. Many chose to stay. Wow! That was a lot of history! And most British colonies are now independent. But why is English still so important today? Well, that’s true. Most former colonies have become independent but there’s the Commonwealth. The Commonwealth is an organisation which includes the UK and former British colonies. And English is the official language in four Commonwealth countries: Canada, the USA, India and Australia. It’s the language of communication in all 54 Commonwealth countries. Almost one third of the world’s population belong to a Commonwealth nation.

In some of these countries you even have languages which are a mix of English and a local language, like Hinglish in India- that’s a mixture of Hindi and English.

Those mixed languages are often hard to understand for English native speakers in other countries. I see. And do people in other English-speaking countries use different words?

Yes, they do. People from different English-speaking countries can usually understand each other, but there are differences. Some of the biggest differences are between British and US English. For example spelling: A British person would spell colour: c,o,l,o,u,r but an American would leave out the ‘u’. Another eample would be favourite.

Right And they also use some different words. For example a British person says autumn, an American fall.

Or a British person would say holiday, an American vacation. Do you know any more differences between British and American English? There are some different slang words, too. For example slang words for ‘friend’. In Britain or Australia you can say ‘mate’. In the USA, people say ‘buddy’. In New Zealand people say ‘cobber’ and in South African some people saay ‘guzzie’!

Well, that’s very interesting, but that’s all we have time for. Thanks for talking to me mate! Yeah, thanks buddy! Bye!