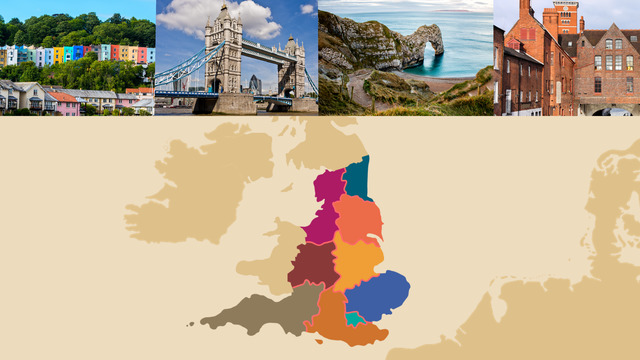 Do you know the name of these islands? This might help. You might think „Ahhh, that's England!“ Actually, only this part is called England. In today's video, you learn about „England“, its „regions, cities and sights“. Now, back to our map. England is one of three countries that make up the island of „Great Britain“. The others are called „Scotland“ and „Wales“. And even though there is only one government for the whole of Britain, and everybody gets the same passport, many aspects of government are organised differently in each country. Now we know that England is part of Great Britain. It is also part of what we call „The United Kingdom of Great Britain and Northern Ireland“, commonly known as „the United Kingdom“ or even „Britain“. The United Kingdom includes the island of Great Britain (that means England, Scotland and Wales) the north-­eastern part of the island of Ireland (that's northern Ireland), and many smaller islands within the British Isles. It's a parliamentary democracy and constitutional monarchy. The flag from the beginning of the video is called „Union Jack“, and it's the national flag of the United Kingdom. But what's the national flag of England then? If you look very closely, you can see the English flag within the Union Jack. It's a red cross on a white background. We also call this „Saint George's Cross“. Did you know, that England has also got its own national flower? It's the Rose. Now, before we take a closer look at England, there's one thing you should keep in mind. Welsh, Scottish and Irish people feel their identity very strongly. So if you talk to people from Britain and you are not sure where they come from, it is safest to use „Britain“ when talking about where they live and „British“ as the adjective to describe their nationality. This way, you will be less likely to offend anyone. England takes up the biggest part of the island of Great Britain. For administrative purposes, England is divided in nine regions: South West England has the largest area of all regions. The smallest one is Greater London. Even though it includes the capital city of England (London) which is huge, it's not where most people live. The most populous region is South East England. Have you ever been to London? It's a fascinating city where you find the headquarters of all government departments, the country’s parliament, its major legal institutions and even the monarch of the United Kingdom! London is very cosmopolitan. You'll find a great degree of cultural variety there: More than threehundred languages are spoken, there's cuisine from more than seventy different countries and nearly a third of all Londoners where born outside Britain. If you get a chance to visit the city, make sure to check out Buckingham Palace, the Houses of Parliament and Big Ben and Tower Bridge. If you travel through Southern England, from London to Dover, you pass through the county of Kent. It's known as „The Garden of England“ because of the many kinds of fruit and vegetables grown there. The region known as „the West Country“ evokes an image of „rural beauty“ in many British people's minds. There is one larger city, Bristol, but farming is more widespread. The south-west peninsula, with its rocky coast and small bays, is a popular holiday area. „East Anglia“, to the north-east of London as well as „the Norfolk Broads“ further east are also comparatively rural, with only few towns. In the Midlands of England there's Birmingham. One of England's biggest cities. During the Industrial Revolution, Birmingham developed into a major engineering centre. You can find a lot of industrial areas in the Midlands. Notably the area surrounding Birmingham and Manchester, which is another big city. Have you ever heard the name „Stratford-upon-Avon“? It's William Shakespeare's birthplace and a popular tourist destination. This guy here is called Robin Hood. The legend of „the king of thieves“ takes place near Nottingham, where many tourists also like to visit. Northern England has also got a rather industrial landscape. Towns such as Bradford or Leeds became producers of woollen goods in the 19th century. Many other towns at the sides of „The Pennine Hills“ were concentrating on coal mining back in the days. That's why the North of England used to evoke an image of noisy, dirty factories that symbolised the Industrial Revolution. Today, that's no longer the case. Not many people live in the very north of England. In the north-western corner of the country you can visit „the Lake District“. Many Romantic poets used to write about this beautiful area that today is a National Park. Would you like to go hiking there? It might inspire you to write a poem.