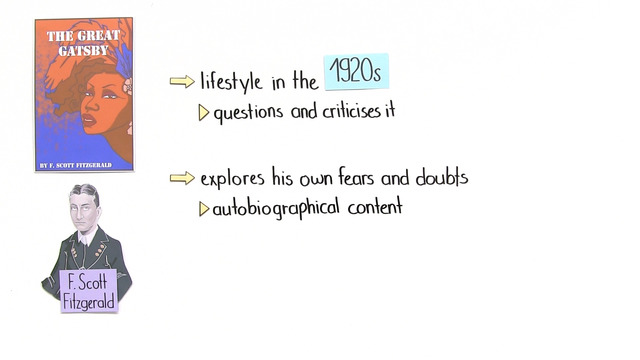 The book “The Great Gatsby” – Inhalt

The Great Gatsby – The American Dream

The Great Gatsby was written by the American author, F. Scott Fitzgerald. Fitzgerald planned the novel in the summer of 1922 and it was published in 1925. The Great Gatsby is thought to be one of the greatest American novels of this era.

This video will introduce you to the historical background of “The Great Gatsby”. By the end you will know the events that influenced Fitzgerald to write this novel. You will also understand some of the themes that existed in 1920s America.

Some of the vocabulary may be new for you so it’s a good idea to have your English dictionary nearby!

Historical context of The Great Gatsby

The Great Gatsby was written in and set in the 1920s. This was the height of the Jazz Age. The Jazz Age was a period in which jazz music and dance became very popular in America and some parts of Europe.

In 1918 World War I had ended and the 1920s were a time of wealth and prosperity for the US. People were trying to forget the horrors of the war by going out and celebrating.

America had prohibition laws, brought in in 1919, which meant it was illegal to sell alcohol. Therefore the wealthy people had large private parties at home with their own alcohol.

As you can see, the Great Gatsby was set in a time characterised by partying and celebrating. This time is said to have been very superficial. This means that people only focused on seeing people and being seen; there was little depth in conversations and actions. The Great Gatsby explores and questions the superficiality of that time.

The 1920s came to an end with the Great Depression. In 1929 the stock market crashed in America. A lot of money was lost and everyone was affected.

The time when “The Great Gatsby” was written and set was therefore a prosperous bubble sandwiched between two devastating world events, World War I and the Great Depression.

The concept of the American Dream suggests that people can forget where they originally come from and become who they want to be by working hard. Maybe you’ve heard of the expression “from dishwasher to millionaire”.

In a time where social class was very important, the American Dream offered people the chance to escape their class and become part of a higher class. This is called social mobility.

The idea of escaping the situation you were born into is particularly relevant because of America’s colonial history. The settlers who arrived in America wanted to forget their immigrant past and start new lives. America used to be called The New World.

The Great Gatsby is set in this context. All the main characters have come to the East Coast to start new lives. Gatsby experiences social mobility and tries to forget his past by reinventing himself.

However, the negative ending of the novel suggests that starting a new life is not possible. Fitzgerald uses Gatsby and the other main characters to question what the American Dream is and whether it actually exists.

Autobiographical context of The Great Gatsby

Although the Great Gatsby is a work of fiction, parts of the novel are autobiographical. This means that Fitzgerald based some events in the novel on his own life.

Just like Nick Carraway, Fitzgerald was from Minnesota and was educated at an Ivy League University. But there are also many similarities to the character Jay Gatsby: Fitzgerald was a sensitive man who idiolized wealth and luxury.

He moved to the East Coast of the USA and met his future wife while he was in a military camp, just like Gatsby in the novel. Daisy's character is based on Fitzgerald's wife, Zelda, who was also in love with money and material wealth. Both women were described as very beautiful.

Fitzgerald and Zelda had a lavish lifestyle. They partied hard and spent a lot of money on having a good time. Fitzgerald became an alcoholic and Zelda suffered from mental health issues. They both struggled with this lavish, hedonistic lifestyle of the 1920s. Fitzgerald uses the Great Gatsby to question and criticise the ideals of the time. Thus, Fitzgerald questions his own life, too.

When Fitzgerald wrote the Great Gatsby, America was in between two very important and devastating world events, World War I and the Great Depression. People looked for happiness through wealth and the 1920s were characterised by parties, Jazz and illegal alcohol.

Another driving force of the time was the American Dream. This concept gave people energy and hope to forget the past and look to the future. Fitzgerald uses the Great Gatsby to look at the lifestyle in the 1920s and to question and criticise it. He also explores his own fears and doubts in the novel, which is shown by the autobiographical content.

The Great Gatsby is thought to be one of the greatest books of that time. It both glorifies and criticises the 1920s lifestyle and the American Dream.

What do you think about the American Dream? Do you think people can forget where they come from and start a new life? If you could reinvent yourself, who would you choose to be?

See you next time - bye bye.

“Of Mice and Men” – interpretation and public perception (Steinbeck)