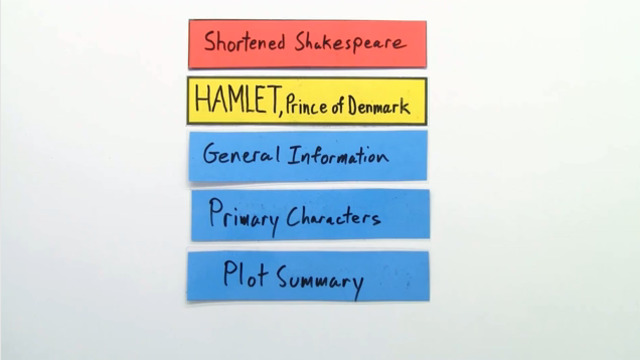 Hello my name is John and I come from the U.S. near Chicago. The title of this series is shortened Shakespeare and today's play is Hamlet, Prince of Denmark. Just to be warned this presentation is in English so you may want to have a dictionary handy. This presentation will be divided into general information about the play, primary characters, plot summary and questions. General Information. Date written: 1601 in England. The story is mostly set in the royal castle of Elsinore in Denmark. Themes in Hamlet. Hamlet is primarily about the revenge of a murder and a study of sanity. Hamlet is classified as a tragedy. Primary characters. Hamlet, Prince of Denmark, son of the previous king. The ghost of Hamlet's father. Claudius, king of Denmark, uncle of Hamlet. Gertrud his queen and mother of Hamlet. Polonius, the Lord Chamberlain. Laertes his son, Ophelia his daughter, Horatio, Hamlet's friend, Rosencrantz and Guildenstern courtiers and Fortinbras, king of Norway. Plot summary. On a cold night in front of the castle, Horatio, Hamlet's friend meets two guards who speak of a ghost they've seen. The ghost appears again. Horatio notes the ghost looks like the former King, Hamlet's father, and decides to inform Hamlet about the spirit. At court, we meet Claudius the new king and Hamlet's uncle, as well as Gertrude the Queen, and Hamlet's mother and the Chamberlain Polonius. Gertrude asks Hamlet to stay and not go back to the university at Wittenberg. Hamlet agrees as he is still in mourning for his dead father. Before leaving for France, Laertes warns his sister Ophelia to stay away from Hamlet. At midnight the ghost of Hamlet's father appears again and tells Hamlet that he was murdered by Claudius. While sleeping in his garden Claudius poured poison in his ear thus killing him. Hamlet's father was murdered by Claudius. Hamlet pretends to be mad in order to see if the ghost has spoken the truth and if so to revenge his father's death. While Claudius and Polonius spy on him, Hamlet enters a castle hall deep in thought. To be or not to be. That is the question. Ophelia approaches Hamlet who then renounces his affections for her. Hamlet rejects Ophelia. A group of actors has arrived and Hamlet instructs the actors to re-enact the murder of his father. That evening Claudius is upset by the play and Hamlet is now sure that Claudius is in fact the murderer of his father. Claudius is upset by the play within a play. Hamlet then goes to his mother's chambers to denounce her. He notices a movement behind a tapestry and stabs Polonius who had been eavesdropping. Following the death of his trusted adviser Claudius decides to send Hamlet to England along with Rosencrantz and Guildenstern. The letter they are carrying asks the king of England to execute Hamlet. Hamlet alters a letter to have Rosencrantz and Guildenstern killed. Before Hamlet returns to Denmark, Ophelia has gone mad and drowned. Hamlet returns and beats Horatio in a graveyard as two gravediggers are preparing Ophelia's grave. They dig up various bones and skulls one of which belong to the old court fool. Alas poor Yorick. I knew him Horatio. Laertes appears and a duel is arranged between him and Hamlet at the court. Claudius plans Hamlet's death by poisoning both Laertes sword and a goblet of wine. But things go wrong. Both Hamlet and Legatees are cut by the poisoner sword. Gertrude drinks the wine and before he dies Hamlet kills Claudius. Porton Brod then arrives and Horatio tells the new king what has occurred. Gertrude, Laertes, Claudius and Hamlet die. Worton Brar becomes king. The end. Questions. The play is set in which country? Denmark. Who is the ghost? Hamlet's father. What is the relationship between Claudius and Hamlet? Claudius is uncle of Hamlet. Who are brother and sister? Laertes and Ophelia. How did Claudius kill Hamlet's father? He poisoned him. Who was killed behind a tapestry? Polonius. Who did Hamlet trick on the way to England? Rosencrantz and Guildenstern. Who drowns? Ophelia. Whose skull does Hamlet find? Yorick's. How does Claudius plan to kill Hamlet? By poison, sword or poisoned wine. Who fights a duel? Hamlet and Laertes. Who dies in the last scene? Laertes, Gertrude, Claudius and Hamlet. OK. This is John saying: That's it for today. Bye bye. Until next time with Shortened Shakespeare.

"Of Mice and Men" – interpretation and public perception (Steinbeck)