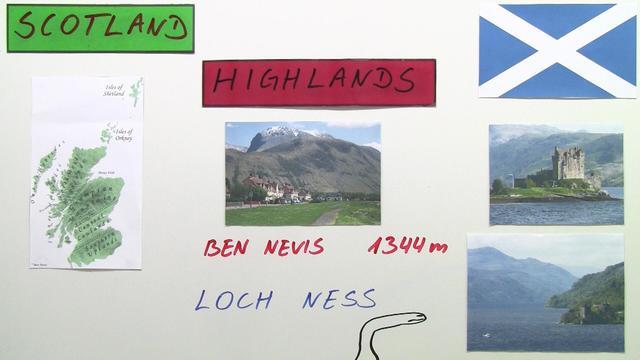 Hello! This is Adrian. I’ve got a question for you. What do you know about Scotland? Today I will tell you about regions and cities of Scotland. Let’s go. This is the Scottish flag. It is the Saint Andrew’s cross, also known as a saltire. It was adopted as the national flag in the 16th century, but it appeared as a symbol of Scotland in the 13th century. And this is Scotland. It takes the northern third of Great Britain. It occupies 78,387 km² of it. The country borders England to the south. In addition to the mainland, Scotland consists of more than 790 islands. Scotland has about 5,295,000 inhabitants, which makes only 8% of the population of the United Kingdom. The whole UK counts over 63 million inhabitants. Scotland is divided into three geographical regions: the Highlands, Central Lowlands and Southern Uplands. The biggest city of Scotland is Glasgow, with 590,000 inhabitants. You might think it is the capital city of the country, but no. The capital city of Scotland is Edinburgh. It is ranked second-biggest city of Scotland. Of course, the capital city of Scotland is big, too, and counts 469,000 inhabitants. Edinburgh is a place where history and natural beauty combine. It is no wonder that the city is one of the most popular tourist destinations in Europe. Certainly, one of the most popular attractions in Edinburgh is Edinburgh Castle. Then there is the Royal Mile, which is nearly one mile long and connects the two royal residences of Edinburgh Castle with the Palace of Holyrood House. The Royal Botanic Gardens of Edinburgh are the second-oldest botanic gardens of the UK, right after Oxford. The Edinburgh Fringe Festival is the largest arts festival in the world, held every August, and runs for three weeks. Then there is the National Museum of Scotland, with over 8,000 objects to see, the Camera Obscura, which is a very mysterious experience, and many, many more. Actually, there is no chance to get bored in Edinburgh. But Scotland has also other famous cities and regions. Let’s go back to Glasgow for a minute. Glasgow is in the southwest of Scotland. An interesting fact is that it is the third-biggest city of the UK. The Greater Glasgow urban area counts 1,750,000 inhabitants, which makes more than 30% of the population of Scotland. It is not very far from Edinburgh and it is absolutely worth visiting. You might have heard about Aberdeen. It is the third-biggest city of Scotland. It has about 220,000 inhabitants and is located on the northeast coast of the country. It has a huge seaport and is well known because of the oil industry. Okay, I would like to mention one of the Scottish regions one more time: the Highlands. Well, the Highlands were exposed less to the English influence than the Lowlands. As a result, they have preserved their own cultural character, in particular the clan structure and whisky made them world-famous. Also, the highest mountain of the UK is there. The Ben Nevis is 1,344m high. And you probably have heard about the Loch Ness and its famous monster. It is also located in the Highlands. Another interesting place in Scotland is Stirling. It is a small city between Edinburgh and Glasgow with a wonderful castle and a William Wallace monument. That is the place were Scots fought against England and won their independence. William Wallace and Robert the Bruce were leading the Scots. The battle is known as the Battle of Bannockburn. The last thing about Scotland I would like to mention today are the Scottish lochs. “Loch” is a Scottish Gaelic word for lake or fjord. Scotland has more than 31,460 lochs, which are very beautiful and absolutely worth seeing. Okay, I think we’re approaching the end of this video. Before I say goodbye, I would like to sum up: what did you learn about today? Scotland has an area of 78,387 km² and counts over 5,295,000 inhabitants. Scotland is divided into three geographical regions: the Highlands, Central Lowlands and Southern Uplands. The most important cities and metropolitan areas are Edinburgh, Glasgow, Aberdeen and Stirling. I hope I could help you to learn about regions and cities of Scotland. Thank you very much for watching and see you next time! Bye-bye!