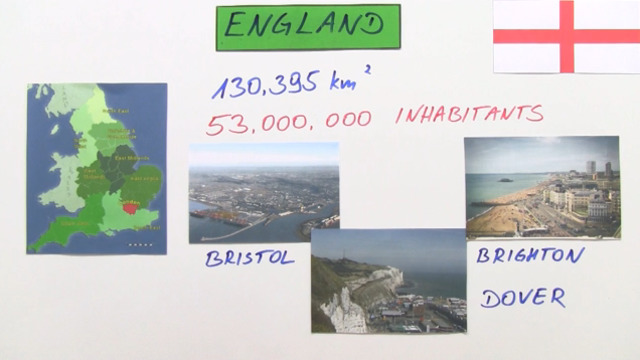 Hi! This is a video made by Adrian. Have you ever been to England? Because that's our topic today. I will tell you some things about English regions and cities. Let's go!

This is the English flag - it is the St. George's Cross. It was adopted as the national flag in the 16th century. It appeared as a symbol of England in the Middle Ages. Well, and this is England. It takes up more than two thirds of the central and south of Great Britain and is therefore the biggest part of it. England is 130.395 square kilometre big. The country borders Scotland to the north and Wales to the west. England has over 53 million inhabitants.

For administrative purposes England is divided in nine regions: East Midlands, East of England, Greater London, North East England, North West England, South East England, South West England, West Midlands and Yorkshire and the Humber. The biggest region is South West England, the smallest one is Greater London. Well, you might think now that London is possibly the smallest region of England but certainly the most populated, huh? Of course, the capital city of England is huge and counts over 8.5 million inhabitants. Can you imagine, it is like Berlin, Hamburg, Munich, Cologne and Frankfurt all together! But here - a big surprise. Greater London is ranked second! The most populated region of England is the South East with over 8.7 million inhabitants. It contains six important cities: Brighton and Hove, Canterbury, Oxford, Southampton, Chichester and Winchester.

But let's go back to Greater London. Like I said before, London is the capital city of England and of the United Kingdom. It is also the biggest city in the UK with a total area of 1572 square kilometres. It was founded by Romans, approximately in 43 after Christ. The region consists of the city of London and 32 London Boroughs. It is absolutely worth visiting! The major attractions are of cource the Buckigham Palace where Queen Elizabeth the Second and the Royal Family are at home; the Houses of Parliament and the famous clock tower Big Ben; the British Museum with its breathtaking exhibitions; London Eye, from which you can admire London's skyline. Other must-see sights are the Tower Bridge and the Tower of London. Actually, there is no chance to get bored in London.

But England has of course other famous metropolitan regions, such as Greater Manchester in the Northwest of England. It is the third most populated area with over 2.7 million inhabitants. It was also founded by Romans in 79 after Christ. You have probably heard of Manchester United, a football club that is well-known all over the world. Also, many famous music artists are from Greater Manchester like Take That, The Verve, The Chemical Brothers and many, many others.

Another important metropolitan area in England is Liverpool which is home of the Beatles. Liverpool is the fourth most populated city of the UK. Besides the Beatles, over 467.000 people call Liverpool their home. It was founded in 1207 and was granted a city status in 1880. Did you know that Liverpool is recognized by the Guinness World Records as the World Capital City of Pop?

Newcastle Upon Tyne is the next interesting city and metropolitan borough in England. This time we are in the Northeast of the country. The city was founded in the second century and has grown to 280.000 inhabitants today. People from Newcastle speak an original dialect which can't be found in other parts of the UK.

Let's go on to Bristol. It is located in South West England with a population of over 430.000. As a major seaport it is the port of entry for important goods like cars, grain, timber and petroleum products.

One more city worth mentioning is Brighton. It is inhabited by over 156.000 people. It is located on the south coast of England. It has beautiful beaches which are a popular destination for tourists, especially from London which is less than an hour away.

The last city I would like to mention today is Dover. Well, it is pretty small but extremely important. Dover is a town and a major ferry port in the Southeast of England. It faces France across the English Channel and is the port of entry for most visitors coming from the European continent. If you go to England by car one day, Dover will most likely be the first place where you'll set foot in England.

Ok, I think we are approaching the end of this video. Before I say goodbye I will sum up what you have learned today. England takes up 130.395 square kilometres and counts over 53 million inhabitants. The country is divided in nine regions: East Midlands, East of England, Greater London, North East England, North West England, South East England, South West England, West Midlands and Yorkshire and the Humber. The most important cities and metropolitan areas are: Greater London, Greater Manchester, Liverpool, Newcastle, Bristol, Brighton and Dover. I hope I could help you to learn about the regions and cities of England. Thank you very much for watching and see you next time! Bye Bye!