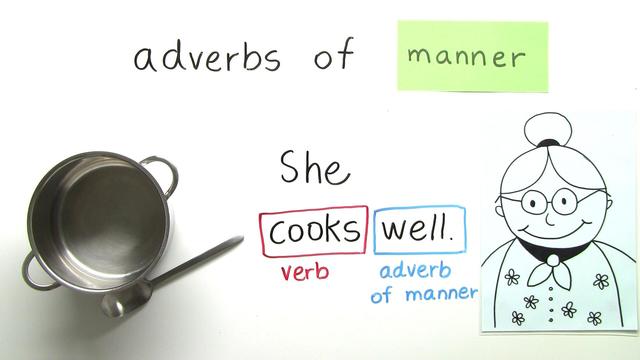 Hello, how was your day? In this video I will teach you all you need to know about the position of adverbs in a sentence. Specifically, we will be talking about the adverbs of manner, place and time. In diesem Video lernst du alles zum Thema die Stellung des Adverbs im Satz. Ganz genau geht es um die Adverbien der Art und Weise, des Ortes und der Zeit. I hope you'll enjoy this lesson. In an English sentence, adverbs can be placed at three basic places. In the beginning, in the middle or at the end. This is called front position, mid position or end position. What do these mean? Front position means that the adverb is placed before the subject. For example, unfortunately, he didn't get that job. Leider hat er den Job nicht bekommen. Mid position means that the adverb is placed between the subject and the verb. For example, my boss often travels to Prague. Mein Chef reist oft nach Prag. Often, you have more verbs in one sentence. Like in this example: I have never been abroad. Ich war noch nie im Ausland. In this situation, the adverb is placed between those two verbs. Specifically, it´s between the auxiliary verb, also called the help verb, and the main verb. I have never been. And if the verb is the verb to be, then you always put the adverb after this verb. She is always happy. Alright, the only position left is the end position. Here, the adverb is really at the end of the whole sentence. He had a tennis lesson last week. You have just learned about the three basic positions of adverbs in a sentence. The front position. Unfortunately, he didn't get that job. The mid position. My boss often travels to Prague. Or I have never been abroad. And the end position. He had a tennis lesson last week. The main topic today is the adverbs of manner, place and time. Auf Deutsch heißen sie die Adverbien der Art und Weise, Adverbien des Ortes und Adverbien der Zeit. Let's start with the adverbs of manner. These are for example, well, gut, quickly, schnell, instantly, sofort. Die Adverbien der Art und Weise steht immer nach dem Verb. She cooks well. Wenn auf das Verb ein direktes Objekt folgt, steht das Adverb hinter dem Objekt. The student answered the question quickly. Betty replied to my email instantly. Here are more adverbs of manner for you: Quietly, leise, loudly, laut, patiently, geduldig, fast, schnell, easily, einfach, carefully, vorsichtig, correctly, richtig. Let´s now talk about the adverbs of place and time. Adverbien des Ortes und der Zeit. These are for example outside, draußen. This is an adverb of place or yesterday, gestern, this is an adverb of time. Adverbien des Ortes und der Zeit stehen meistens nach dem Verb am Satzende und nie zwischen dem Verb und dem direkten Objekt. He went outside. She called yesterday. Sometimes, the adverb of time is put at the beginning of a sentence. This shows the contrast to something, that has been said before. Tomorrow, he is going to see a movie. Und jetzt pass mal auf. Wenn mehrere Adverbien in einem Satz verwendet werden, gilt Ort vor Zeit. I was searching for my keys everywhere yesterday. Also erstmal sagst du das Adverb des Ortes, everywhere und dann erst das Adverb der Zeit, yesterday. Everywhere yesterday. Another example for you. I was at home all weekend. And one more example for you. I usually go to the cinema at the weekend. Do you still remember what an adverb of manner was? This was an adverb which answers the question how. For example, the word well is an adverb of manner. Was machst du also, wenn in einem Satz nicht nur Adverbien des Ortes und der Zeit zusammenkommen, sondern auch ein Adverb der Art und Weise. Dann gilt die Reihenfolge, Art und Weise vor Ort und Zeit. The pianist performed well at the concert last night. One more example. He sat quietly in his office all day. That’s almost all for today. Before you go, let me do a quick revision of everything you have learned today. Adverbs in an English sentence can be at the beginning, the middle or the end. Today, we focused on the adverbs of manner, Art und Weise, place, Ort and time, Zeit. Adverbs of manner answer the question how. For example, she cooks well. An adverb of place can be seen in this sentence. He went outside. And an adverb of time can be seen in this sentence. She called yesterday. If in one sentence you have both an adverb of place and time, the place goes before time. I was searching for my keys everywhere yesterday. And if you have all three kinds, an adverb of manner, place and time, the rule is this: Art und Weise vor Ort und Zeit. He sat quietly in his office all day. So, this is it. Don’t forget to watch the practice video to this topic, so that you can test your knowledge. Have a good day. Bye.

Adverbs of place and time – Satzstellung

Adverbs: “so, such, quite” and “rather” (Übungsvideo)