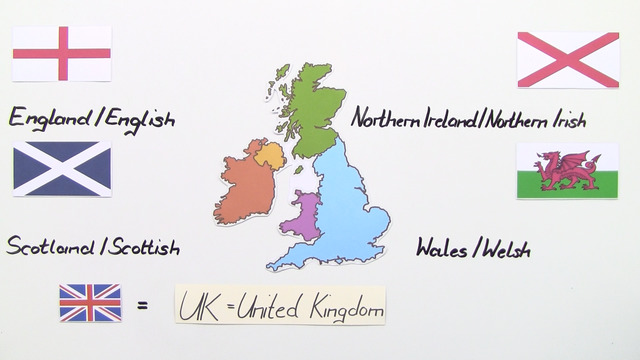 Steckbriefe: Great Britain and the UK

Hi! I’m Kathi and I’m a Great Britain fan – Britain is great! In this video I want to tell you some important facts about Great Britain – I mean … the UK – the United Kingdom. Well, England too and London…

Different parts of the UK and Great Britain

Phew! That was hard work! Today is a special day. It’s the birthday of the queen of the United Kingdom, Queen Elizabeth 2nd.

Did you know that the Queen has two birthdays? Her real birthday in April and her official birthday on a Saturday in June. This is because the weather is better in June for her special Birthday Parade outside Buckingham Palace, her home in London.

The parade is performed by her special guards. Phew! Those hats must be hot in June! They are made out of real bear skin! But I would like two birthdays, too!

Look! This is my birthday present. A puzzle of the United Kingdom - of course! Let’s do the puzzle! So here are the first pieces. Ah ha! It’s Buckingham Palace again. And the flag.

And this piece is a place in the south of London, Greenwich. No, not green witch - Greenwich. But what’s this funny line? That’s the Greenwich Meridian Line – the world time line.

So what’s this piece? Ah! I know this man, it’s William Shakespeare. He is the most important British writer of all time. He was born in 1564 Stratford-upon-Avon and died in 1616.

Shakespeare wrote 38 plays - Theaterstücke. His plays are about things like love, friendship and power. Romeo and Juliet - Romeo und Julia, The Merchant of Venice - Der Kaufmann von Venedig and A Midsummer Night’s Dream - Ein Sommernachtstraum are all famous films today.

Ah! There is also a famous movie about this man. His name is Robin Hood. Nobody knows if he really lived - his story is a legend. Stories tell us that Robin Hood lived in a Sherwood Forest near Nottingham with a group of friends who helped him.

So… ah! This piece is taking me to the West. Croeso I Gymru- where am I? Ah ha! Welcome to Wales.

In Wales the official languages are Welsh and English. Welsh is a Celtic language - eine keltische Sprache - like the Scottish and Irish languages.

The capital city is Cardiff. Wales is famous for sport - rugby and football.

Here you can find Mount Snowdon, the highest mountain in Wales and one of the most beautiful places in the UK.

Here we have Scotland. The capital city is Edinburgh.

Traditional Scottish clothing for a man is the kilt. Each big family has its own special pattern - Muster. A typical Scottish instrument is the bagpipe. The bagpipe is not my favourite instrument.

Scotland is the home of the Loch Ness monster – or Nessie. Nessie is a monster who some people say lives in the lake of Loch Ness. Some people say they have seen Nessie and even taken a photo of her. But no one knows if she is real…

The capital city is Belfast. The famous ship the Titanic was built in Belfast in 1912. The Titanic left from Southampton in 1912. It was the biggest ship in the world, but it crashed into an iceberg and sank. Sie kollidierte mit einem Eisberg und sank.

So now the puzzle is finished. Welcome to the UK! For my next birthday I want a plane ticket! Hope you enjoyed the video! Bye!